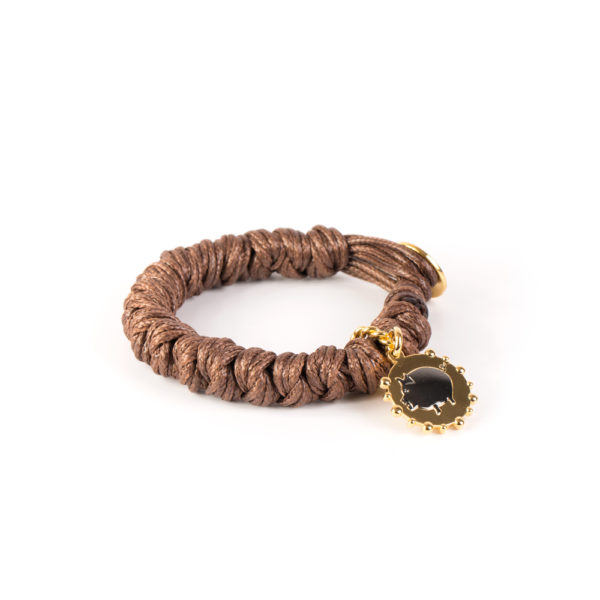 The brand’s emblematic bracelet, designed in the late 90s, knotted with fine brown cotton cords impregnated in wax with a piglet charm Toi Toi Toi and an E·Y bronze button in a 18k yellow gold plating.

Symbology of the Pig.

The pig as a totem is important in various cultures. In Chinese culture it is a symbol of luck in money and wealth. In Celtic European culture it is also a magical symbol. Among the Greeks, the pig was also a sacred fertility totem, and the American Indians have it as a totem of abundance and wealth just like the Chinese.
The pig moves quickly and with determination. The pig intuitively knows how to react to various situations. If the pig is your personal totem, it will teach you your determination and quick movements to take the right actions in your life.
The Greek land goddess of fertility, Demeter, kept a sacred pig, which became a symbol of fertility.

Have you ever heard that from Toi, toi, toi? Always three times. It is an expression used above all in show business, it is what artists say to each other when they go out on stage. Although it is also possible that someone tells us to simply wish us good luck in an exam or in an interview.

We guarantee that our accessories are made by combining natural materials, from which we make exclusive and personalized designs.