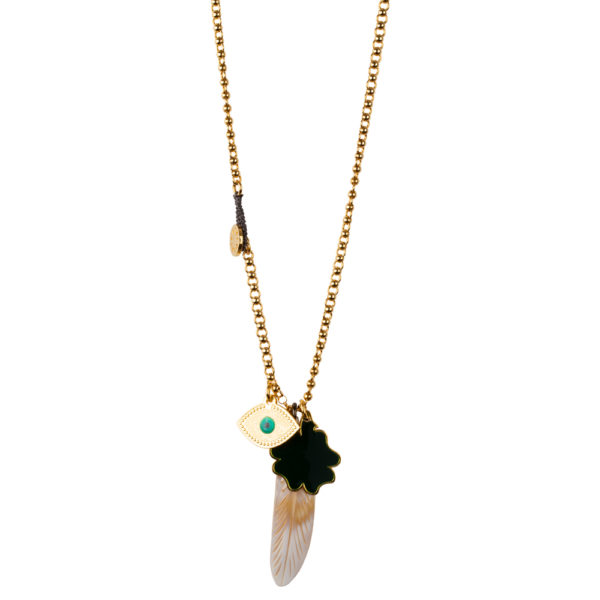 Our representation of the Turkish Eye, also known as a nazar, is a bead in the shape of an eye to which protective forces are attributed, and which is widely used as a talisman or amulet against the evil eye and bad energy. Its original name, from the Turkish language, is nazar boncuğu, which means ‘evil eye bead’. It is very common in Turkey and Greece (hence it is also known as the Greek eye) for protection against the negative influence of envy, traditionally known as ‘evil eye’. According to tradition, which dates back to the times of ancient Egypt and Babylon, the bad feelings of the human being are projected through the eyes, since these are the most expressive part of the body.

The 4-leaf clover plays a fundamental role in our symbology. For every 10,000 common three-leaf clovers, we can find a single four-leaf clover. The 4-leaf clover is considered a genetic anomaly, the four-leaf clover has been the subject of myths and legends for more than 5,000 years. The 4 clover leaves symbolize, according to the culture where various things are known. In Jewish culture each symbolizes the letters of the word God,
In other cultures they coincide in signifying the cardinal points, the phases of the moon, the seasons of the year or the elements of nature, and are loaded with nutritional and medicinal properties. Phoenicians used to give four-leaf clovers to their loved ones to preserve their love, and mothers hung clovers around their children’s neck to protect them against the adversities of life.
It has been believed for millennia that finding a four-leaf clover without actually searching for it augurs well, and will bring wealth and prosperity.
In ancient Rome it was associated with prosperity, and dreaming of this plant was a sign of great wealth. The Greeks came to believe that it served them to discover great treasures.

Feathers belong to birds, especially considered as free animals due to their ability to fly, which is why whoever carries a feather with them affirms their decision to live freely or to seek freedom. Our carved mother-of-pearl feather also evokes the element of air, as they logically require air to function and keep birds in flight. This is why they are also related to ideas, intellectuality and the ability to communicate what we think.